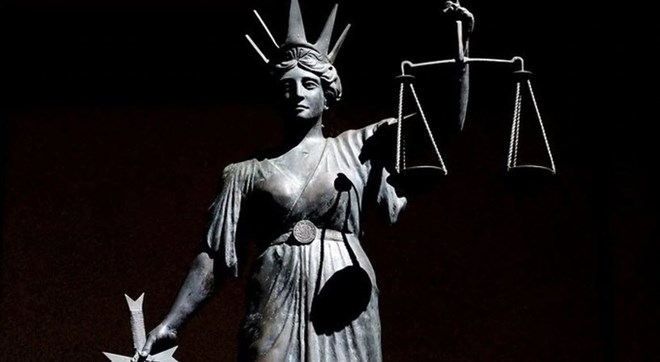 Generic picture of a statue of Themis, the Greek God of Justice, outside the Supreme Court in Brisbane. (AAP Image/Dave Hunt) Source: AAP

A woman accused of sending her daughters to Somalia to undergo genital mutilation has pleaded not guilty in a Queensland court.

The defendant faces two charges of removing a child for genital mutilation- in the first prosecution of its type in Queensland.

The woman allegedly took the two girls, aged nine and 12, to Somalia in April 2015.

The defendant and the daughters cannot be identified for legal reasons.

Evidence will be heard from 10 witnesses for the jury trial in the District Court, which is expected to finish by the end of the week, and her Brisbane District Court trial is set to begin on Monday.

twitter sharing button Tweetlinkedin sharing button Sharemessenger sharing buttonwhatsapp sharing buttonemail sharing button Sunday August 9, 2020 US civil affairs team to sector one anti-aircraft asset commander Col Ismail Sendagire handing over the donations to the officers (PHOTO/Courtesy). US civil affairs team to sector one anti-aircraft asset commander Col Ismail Sendagire handing over the donations to the officers (PHOTO/Courtesy). MOGADISHU – Uganda Peoples’Defence Forces (UPDF) serving under African Union Mission in Somalia (AMISOM) have received medical support donated by “give to the world”,a US organization, in a symbolic handover function at the Sector one headquarters in Mogadishu. The medical items included medicines like; anthelmintic, antifungal, antiallergy, antibiotics (oral), anti-acids, laxative and diarrhoea, anti-diabetic, vitamins and minerals, analgesics, cough, anti-viral, dermatologicals, and rapid test kits among others. The medical support which is meant for distribution to the Internally Displaced People (IDP) camps in KM-50 was handed over by the US civil affairs team to sector one anti-aircraft asset commander Col Ismail Sendagire. Col Sendagire was also the chief guest, representing the Special Representative of the Chairperson of African union Commission (SRCC) for Somalia, Amb Francisco Madeira. In his remarks, the Chief guest said the donation was in support of the OPD (Out Patient Department) clinics at the AMISOM forward operating base in KM-50, to improve and strengthen health care delivery to members of the IDPs and other vulnerable Somali communities. Col Sendagire further said that the donation will go a long way to alleviate the problem of having to travel long distances for the IDPs and vulnerable populace to receive health care. “These medical supplies will be introduced to the local authorities and IDP communities to demonstrate the longstanding and productive assistance AMISOM was able to generate through the partners to assist Somali communities in need.” he said. Col Sendagire added that the donation reflects commitment to partnership between the US, AU with its institutions and AMISOM. The Deputy Chief of Civil Military Cooperation Lt Col Cyriaque Bikorimana from Force headquarter, who was representing the AMISOM Force Commander said the significance of the donation was to win the hearts and minds of the Somali populace. “AMISOM is not only here to fight Alshabaab but to also extend healthcare services to the Somali population”remarked Col Cyriaque in a brief interview by AU /UN media team. Sector One Civil Military Cooperation (CIMIC) officer, Maj Nicholas Padrille Abiribare said this is not the first time the sector is coordinating such donations with the most recent being on 3rd June 2020, when the Italian army donated Personal Protective Equipment (PPE) to the Somali community, which were duly delivered to the intended beneficiaries. Furthermore,he said that the equipment had an immense positive effect on the Somali community and they were in turn very grateful. “I reiterated my commitment to work closely with stakeholders to coordinate more funds and projects to support the Somali communities” said Maj Abiriballe. The function was attended by US civil affairs team, UK and Italian partners, Commanding Officer Level Two Field Hospital Capt Gideon Nuwagira among others.→