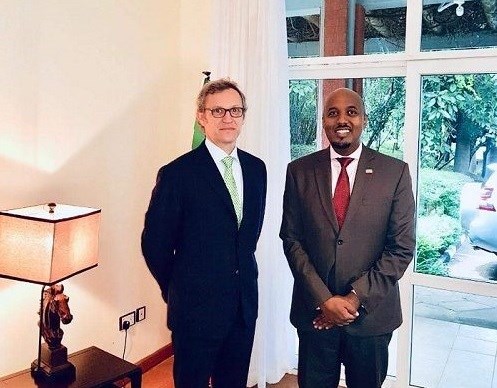 Somaliland is opening its doors for more business institutions and development organizations to venture into the country.

Somaliland ambassador to Kenya Bashe Omar met Switzerland head of Horn of Africa office Siro Beltrametti at the Somaliland embassy in Nairobi where they discussed opportunities available for Swiss investors in the country and also humanitarian and social development issues.

“The Swiss head of Horn of Africa paid a courtesy call to our embassy in Nairobi and we had very good discussions on a wide range of issues key among them being the investment opportunities available in Somaliland,” Bashe said after the meeting.

“We want to build a strong partnership with Switzerland in so many areas, but the most important is to see Swiss investors coming to Somaliland to invest there,” he added.

The discussions according to Bashe also centred on the ongoing engagements aimed at the Somaliland parliamentary elections which are forthcoming and the talks between Somaliland and Somalia.

Last year, Switzerland was keen to assist in the talks between the two erstwhile united countries that broke up at the onset of the 1991 civil war.

Somaliland is pushing for international recognition after breaking away from Somalia.

Somaliland will be celebrating its independence from Somalia on May 18.

Somalia Journalist condemn the killing of a collogue→

President M.C.Farmaajo Not welcome In SLAND→