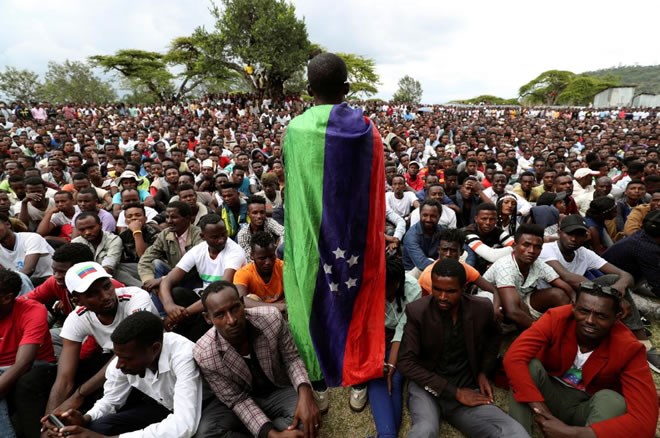 A sidama youth leader carrying a flag addresses people as they gather for meeting to declare their own region in Hawassa, Ethiopia July 17, 2019. REUTERS/Tisksa Negeri

HAWASSA, Ethiopia (Reuters) – Activists in Ethiopia were set to declare a new region for their Sidama ethnic group on Thursday in defiance of the central government, with some residents of the southern city of Hawassa worried that it could lead to violence.

The declaration will be a litmus test of whether Prime Minister Abiy Ahmed’s federal government can maintain its commitment to peaceful political reforms in the face of increasing demands from competing ethno-nationalist groups.

“Red berets, regional special police force are patrolling with grim faces and guns pointed. Special forces can be seen in all corners and small streets,” one resident in Hawassa told Reuters.

Some of his friends were so concerned that violence would erupt on Thursday that they sent their wives and children to the national capital Addis Ababa, he added.

The federal system in Africa’s second most populous nation is designed to allow larger ethnic groups a degree of autonomy.

But smaller groups such as the Sidama, who make up about 5% of Ethiopia’s 105 million people, say they have been sidelined. In addition to the Sidama, at least eight more ethnic groups are campaigning for their own regions.

Fasika Qedele, another Hawassa resident, said it was time for the Sidama people to achieve self-rule.

“The Sidama people have lived under repression for years and years. Now we are super excited as we are on the eve of declaration of our self administration,” he said, adding the people had the capacity and the educated workforce to do this.

On Wednesday, the streets of Hawassa were unusually quiet apart from patrols of truckloads of federal police.

A planning meeting between elders and activists trying to decide on a course of action for Thursday turned heated. Reuters journalists were asked to leave the meeting for what some activists said was their own safety.

Some activists said the government would lose legitimacy if it responded to the declaration with violence.

“I don’t think the government would opt to dismantle itself by resolving to the use of force,” said Tariku Lema, a youth activist. “If the government pursues this track, the people would accelerate their struggle.”

On Tuesday, the National Election Board tried to defuse the situation at the last minute by promising the Sidama they could hold a referendum on having their own region within five months.

But some activists said they had already requested a referendum a year ago with no response. The constitution guarantees the right to a referendum within a year, but does not say what should happen if it is not held.

Tariku, the Sidama activist, said minorities would be protected in the new region like all other Ethiopians.

“As citizens, they would be entitled to all social and democratic rights in the constitution,” he told Reuters.

Ethiopia has seen an explosion of violence since Abiy began his reforms, which have included ending bans on political parties, releasing political prisoners and welcoming home rebel groups.

More than 2.4 million Ethiopians have fled their homes due to drought or violence, the U.N. says, making it the country with the highest number of displaced people in the world.

Tuesday August 4, 2020 Beirut, Lebanon (CNN) A massive explosion ripped through the Lebanese capital Beirut on Tuesday, injuring many people and blowing out windows in buildings across the city. NEWSINSIDEThe source of the explosion was initially believed to be a major fire at a warehouse for firecrackers near the port in Beirut, the state-run National News Agency reported. The blast sent up a huge mushroom cloud-like shockwave and damaged buildings miles from the port, including the headquarters of former Prime Minister Saad Hariri and CNN’s bureau in downtown Beirut. A red cloud hung over the city in the wake of the explosion as firefighting teams rushed to the scene to try to put out the fire. Large numbers of people were wounded in the blast, authorities said, and footage from the scene captured the injured staggering through streets in the capital. The country’s health minister ordered all hospitals in the area to prepare to receive injuries. Homes as far as 10 kilometers away were damaged, according to witnesses. One Beirut resident who was several kilometers away from the site of the blast said her windows had been shattered by the explosion. “What I felt was that it was an earthquake,” Rania Masri told CNN. “The apartment shook horizontally and all of a sudden it felt like an explosion and the windows and doors burst open. The glass just broke. So many homes were damaged or destroyed.” This is a breaking story, more to follow.→